4 in stock (can be backordered)

The 6×2 is an antenna switch which can route 6 antennas to 2 radios. The kit consist of two PCBs, one which is for the RF part that route the actual antennas to the radios and one board which contains a bunch of relays which used to interlock the radios in a fashion that first wins. So if for example radio 1 has selected antenna 5 and radio 2 tries to select it nothing will happen. The RF board is also designed in such a way with three relays per antenna port making it impossible if the interlock for some reason fails to actually connect radio 1 and radio 2 together. The extra relay also increases the isolation between the ports. This version of the 6×2 is built for 7/16 connectors and has got more isolation than the other 6×2 version.

On the boards there is an opening in the solder mask where its best if you solder a shield between the relays. This will increase the isolation between the radios and I have noticed lately that it is also good if you connect the two shields together on the top as well. You don’t need to solder it all the way, since if something fails it will be very hard to get it removed.

The RF board has got 140um thick copper, and I know antenna switches being used with > OM-3500 type of power levels without any problems.

RF board top view – If used as a drilling template, make sure to print is with 1:1 scale 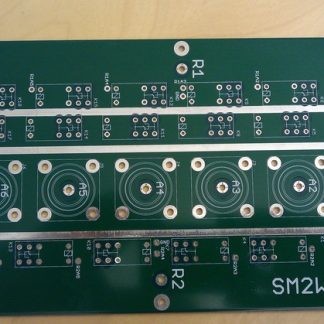