12 in stock (can be backordered)

The stackbox is a device which is used to split power between up to three antennas on 1.8 – 30 MHz. It can be used to switch antennas in a stack or for beaming multiple directions. A stacking system that is made this way is simply an approximation of a two way and three way stack. The UN-UN transformer has got a ratio of 2.25:1 and that way you will get about 56 ohm with two 50 ohm antennas connected and 37.6 ohm with three antennas connected. It means that with with two antennas you will have about 1.1:1 in SWR and with three antennas about 1.35:1 in SWR if the antennas are a perfect 50 ohm match. With a single antenna the VSWR is < 1.1:1. It can also be used as a regular antenna switch for three antennas and of course it is switchable between these different modes.

As the other boards it is at least 105um copper and can handle > OM-4000 power levels without any problem. Use one UN-UN core for the transformer for using powers < 2kW. If using higher power than that then I recommend using two cores.

Reichelt basket put together by DM4IM

Remember to always disable scaling when printing the top print of the board to use as a drill template, so that you are sure you are having a 1:1 scale print. 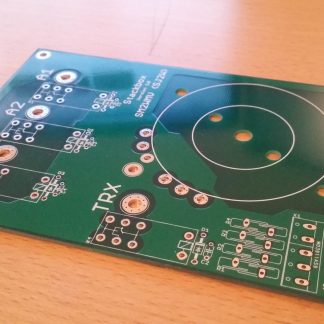